Benjamin Franklin's Thirteen Virtues: Tips for Getting More From Ben

Benjamin Franklin called them virtues; I call them values. In the business world you will commonly see them labeled as guiding principles or core values.

By living your values it allows many of your decisions to be made faster, with a higher degree of confidence and with less cognitive effort. The challenge is that all values are not equally embraced. For example, Franklin recognized both industry and chastity as virtues, yet historical records suggest he was much better at embracing the former than the latter.

In an effort to deal with the virtues he found most difficult, Franklin developed the following method:

The first step was Franklin writing down a list of all the virtues he felt would help him better achieve moral perfection. According to Franklin his initial list was of 12 virtues, but then a Quaker friend pointed out that he might want to consider adding ‘humility.' Conveniently this 13th virtue allowed for the second step, where Franklin concentrated on one virtue per week. Given 52 weeks, this meant that four (4) times a year each virtue became the center of attention.
To track his performance Franklin kept a small notebook. Each day he would mark in the book whether or not he felt that he had successfully embraced the virtue. It was Franklin’s version of the quantified self, using pulp or woven-mold paper and a quill pen to create the excel spreadsheet of the 1700’s. ​​ 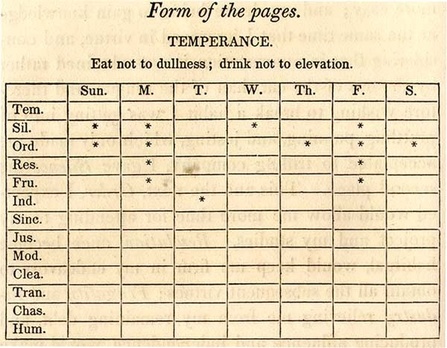 Tips for Using the Franklin Method

I’m curious whether or not Franklin really felt the need to work on 13 virtues. I think it possible he just wanted to get to a number that split nicely into the 4 quarters of the year. With this in mind here are a few tips to consider when working on your own virtues, values, or principles.


Using Benjamin Franklin’s Thirteen Virtues as well as the tips provided, I hope this short article has given you a few ideas to help increase your productivity and achieve more success. While Benjamin Franklin was not a saint, it is hard to argue with the influence and accomplishments he achieved throughout his life.
Copyright © 2009 - 2023, product of Richard LLC. All rights reserved.